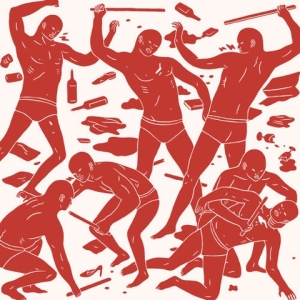 The Great White North can be full of surprises. Contrary to popular belief, none of them are especially polite. Demonstrating such, after a solid three years since their last release, London, Ontario-based Single Mothers have come roaring back with their new album Negative Qualities.

Singer Drew Thomson keeps up with the lyrical themes we’ve come to know and love: a little triumph here, a lot of despair and dissatisfaction everywhere else. The songs are decidedly sarcastic and spiteful, often written in past tense. His subjects include forays and failures in ‘romance’ and drug-fueled escapades. He reserves special digs for the hopelessly-higher-educated (“at least I don’t pretend my whole life’s held together by bookends”) (“she said, “I only believe in patricide” / daddy’s little girl gone wild”), turning their own supposed cleverness against them. The band forgoes some of the catchier hooks and structures that can be heard on the self-titled and Wild Party EPs in favor of a much more compact, headlong dash to destruction. But there’s plenty of caustic guitar overbends to keep things varied, and just enough breaks for us to come up for air, with a pleasant come-down at the end.

All in all, Negative Qualities is a solid debut LP. Though Thomson may continue his adventures in northern Ontario as a literal gold digger after this record, I sincerely hope the band returns with songs about the metaphorical sort.