Making a top ten album list for this year so far was not the easiest thing I’ve ever done. Easier than my grad homework, for sure, but definitely not simple. It was, however, cathartic, in that I got to acknowledge and get stoked about the copious amount of awesome new artists and sounds that has emerged this year, and it definitely calls for some commemoration by a trio of weird, overly existential peeps in their early 20s.

Disclaimer: Katherine made a bomb-ass list, so here goes nothing! Also, these aren’t in a specific order of favorites, because my mind grapes hurt when I think about having to place some before and after others! But here are my top 10: 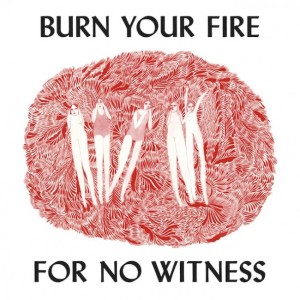 Angel Olsen — Burn Your Fire For No Witness

Angel Olsen is not a brand new artist on the scene, (her debut album Half Way Home was released a couple of years ago, which I highly recommend you also check out), but that doesn’t make her any less relevant or significant to the 2014 music epoch. Her music is unlike anything I have ever willingly listened to that was classified as folk and/or blues, just because I’m a hapless brat. In any event, Angel Olsen has the voice of a modern-day Patsy Cline with more poignancy, something not outwardly deemed possible by many folks, more edge, and a more haunting timbre. It’s gorgeous and harrowing, and the music, a bit more rockin’ and electric than her first album, is the perfect complement to her themes of heartache and loneliness and hope. Also, Angel kicks ass when it’s just her and her guitar putting on a show. The simultaneous simplicity and depth of this album is refreshing and magnetizing; I’m in love. With the album and with her. 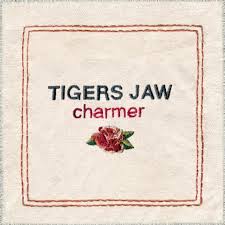 Throughout the band’s existence and despite the unfortunate statement given last year, Tigers Jaw has maintained musical integrity and buzz, their vocals redolent of early 2000s emo that my jejune self used to unhealthily obsess over, per Armor For Sleep, and their distinctive sound similar to that of Pity Sex. But what I mean to say is, Tigers Jaw is an amazing group, they are super current, and they rock the shit out of the Scranton indie scene. Charmer is full of melodic tracks that will get stuck in your head for days, but it’s that sweet kind of unyielding mental attachment. The lyrics are taut with emotion, the band’s signature harmonies are foolproof, and the general, undeniable alchemy between Ben and Brianna’s respective musicality is what continues to drive the characteristic indie qualities of Tigers Jaw.

PRIESTS — Bodies And Control And Money And Power

The first time I heard PRIESTS I did not know how to feel. I was simultaneously intrigued, exasperated, and oddly aroused, but after listening to the full record a few times, I can say that the songs are charged with experimental riffs from all instrumental parties, vocal vigor, and an endearing musical scrappiness. They sound like a more refined Bikini Kill amalgamated with a less abrasive Perfect Pussy, and a pinch of glam. Bodies And Control And Money And Power is a political punch of punk with a signature riot grrl vibe, which happens to be one of my favorite things.

Canadian hardcore punk at its finest, Fucked Up has bequeathed yet another titanic, unbelievable record to the world. There really is no other band like Fucked Up, at least no other that I have been lucky enough to stumble on, but that’s cool, as long as Fucked Up sticks around. Not only is the musicianship of the band extremely impressive, energetic, and driven, but Damian Abraham (i.e. Pink Eyes) himself is an unparalleled entity; his growling vocals are unwavering and seamless, an essential characteristic of Fucked Up’s legacy. Glass Boys is a triumphant record, following the equally fantastic David Comes to Life from 2011.

I. Love. PUP. Another Canadian gaggle of musical juggernauts. Except I’ve had the chance…actually I’ve had two opportunities, holy balls, to see PUP live, and both performances made me fall even more in love with the band. Their self-titled debut album is tight, perfectly orchestrated, and just so damn cool. It gets me stoked for their upcoming material and for the next time that they come through the Midwest, because their energy and excitement is incredibly infectious, just from listening to the record and even more so in a live show setting. They’re loud, they’re fun, and they play so well as a unit.

When I saw PUP the first time, they were on tour with The Menzingers (who also released a great album this year), Lemuria (one of my favorite bands of all time, who released a fantastic record last year), and Cayetana, who I was somewhat familiar with, and definitely excited to witness live. The femme trio did not disappoint; they sounded perfect, so I bought a shirt and covertly followed the bassist around all night, who is super cute (and unbelievably dexterous, holy hell). From the outset, the music of Cayetana is simple, with an awesome alternative, queer rock vibe. But each third of the group has a very unique contribution to the overall sound; the guitar has a surf-like quality, the bass is extremely melodic and dynamic, and the drums are the perfect supporting accessory. Also, Augusta’s voice has the most intriguing vibrato and rasp to it, which is beyond pleasing to the ears.

Released May 12 on Partisan Records

So, I’m not the biggest electropop/dance band fan, for the record. I only know a diminutive amount about the genre and key contemporary players, but I got hooked on Sylvan Esso unbelievably quickly. The electronic duo intrigues me, their chemistry, their actual musicianship, their indie cred. Sylvan Esso’s eponymous record got a lot of buzz here in Milwaukee, being regularly streamed on the local radio station and blowing the roof off at the Pabst Theater last month. Amelia has a mesmerizing voice, with a largely scaled register and noteworthy folk elements. Her melodies meld with the myriad beats and effects that Nick emits to create some truly catchy tunes, ones that also inhabit your brain places for days on end. 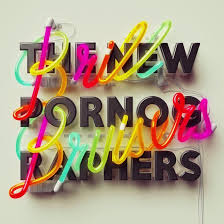 Some Canadian indie rock for the win, in my opinion. The New Pornographers have released their sixth studio album, which says a lot about the musical act’s career and relevance in the scene. The record is rife with fuzzy pop, catchy hooks, and powerful harmonies, which are classic aspects of The New Pornographers craft. Both A.C. Newman and Neko Case have made recent advances in their respective solo careers, both worth checking out, but they have rejoined forces to release Brill Bruisers, their fun, pleasing, and at times poignant contemporary new collection.

Oh, The Lawrence Arms. Metropole may be a bit more reserved and turned down than some of their previous work, but the classic Kelly rasp is there, as well as the entertaining lyrical delivery, explosive moments, and galvanizing choruses. The themes on the album are progressive and mature, there are a lot of uninhibited “fuck yous” and talk of dying, but these facets seem representative of the band itself; The Lawrence Arms has been around a while, and the guys are all pretty grown up by now. Their sound as well as their personalities have matured, and I think this comes across in Metropole, but not in a lame way. They have maintained the snark, the catchiness, and the unrestrained rhythms, all remarkable aspects of what The Lawrence Arms has come to be associated with.

Favorite Tracks: “You Are Here,” “Drunk Tweets,” “Never Fade Away”

St. Vincent is the eponymous fourth studio album of the innovative, imaginative, and seemingly misunderstood St. Vincent, who fascinates me as both a human being and a musician. She can rock the balls off an electric guitar, and paired with her experimental vocal riffs and odd lyrics, St. Vincent is just exceptional. Many songs on this album I considered my summer jams, despite the early spring release, just because I could not stop listening to the record. Sure, she’s strange and different, she bleached her frizzy hair and said “screw it, I’m gonna sing about masturbating on a nondescript day,” (I don’t think she actually said that ever, just so we’re clear), but she also recently collaborated with the one and only David Byrne, and just kicked butt on a whirlwind tour. St. Vincent is memorable, experimental, and lots of fun to dance around to. I wholeheartedly recommend the album.

Favorite Tracks: “Birth in Reverse,” “I Prefer Your Love,” “Regret”

Hope you slightly enjoyed! Let us here at Abandon Hip know what some of your favorite albums for the year (so far) are!